Warning: include_once(): Failed opening '/home/www/mastercreator.atwebpages.com/wp-content/plugins/wp-super-cache/wp-cache-phase1.php' for inclusion (include_path='.:/usr/local/php-8.0.23/share/pear') in /srv/disk2/3394135/www/mastercreator.atwebpages.com/wp-content/advanced-cache.php on line 22
 ‘The brand is so toxic’: Democrats fear extinction in rural Pennsylvania and across the country – Looking at today's world Skip to the content “The hatred for Democrats is just unbelievable. I feel like we’re on the run.”

(Smethport) —  Some Democrats here in rural Pennsylvania are afraid to tell you they’re Democrats.

The party’s brand is so toxic in the small towns 100 miles northeast of Pittsburgh that some liberals have removed bumper stickers and yard signs and refuse to acknowledge their party affiliation publicly. These Democrats are used to being outnumbered by the local Republican majority, but as their numbers continue to dwindle, the few that remain are feeling increasingly isolated and unwelcome in their own communities.

“The hatred for Democrats is just unbelievable,” said Tim Holohan, an accountant based in rural McKean County who recently encouraged his daughter to get rid of a pro-Joe Biden bumper sticker. “I feel like we’re on the run.”

The climate across rural Pennsylvania is symptomatic of a larger political problem threatening the Democratic Party ahead of the 2022 midterm elections. Beyond losing votes in virtually every election since 2008, Democrats have been effectively ostracized from many parts of rural America, leaving party leaders with few options to reverse a cultural trend that is redefining the nation’s political landscape.

Meanwhile, the Democratic Party continues to devote the vast majority of its energy, messaging and resources to voters in more populated urban and suburban areas.

Fetterman, wearing his signature hooded sweatshirt and gym shorts despite the freezing temperatures, described himself as a champion for “the forgotten, the marginalized and the left-behind places” as he addressed roughly 100 people inside a bingo hall in McKean County, a place Trump carried with 72% of the vote in 2020.

“These are the kind of places that matter just as much as any other place,” Fetterman said as the crowd cheered.

The Democratic Party’s struggle in rural America has been building for years. And it’s getting worse.

Barack Obama won 875 counties nationwide in his overwhelming 2008 victory. Twelve years later, Biden won only 527. The vast majority of those losses — 260 of the 348 counties — took place in rural counties, according to data compiled by The Associated Press.

The worst losses were concentrated in the Midwest: 21 rural counties in Michigan flipped from Obama in 2008 to Trump in 2020; Democrats lost 28 rural counties in Minnesota, 32 in Wisconsin and a whopping 45 in Iowa. At the same time, recent Republican voter registration gains in swing states like Florida and North Carolina were fueled disproportionately by rural voters.

Biden overcame rural losses to beat Trump in 2020 because of gains in more populous Democratic counties. Perhaps because of his victory, some Democratic officials worry that party leaders do not appreciate the severity of the threat.

Democratic Rep. Jim Cooper of Tennessee, who recently announced he would not seek reelection to Congress this fall, warns that the party is facing extinction in small-town America.

“It’s hard to sink lower than we are right now. You’re almost automatically a pariah in rural areas if you have a D after your name,” Cooper told The Associated Press. 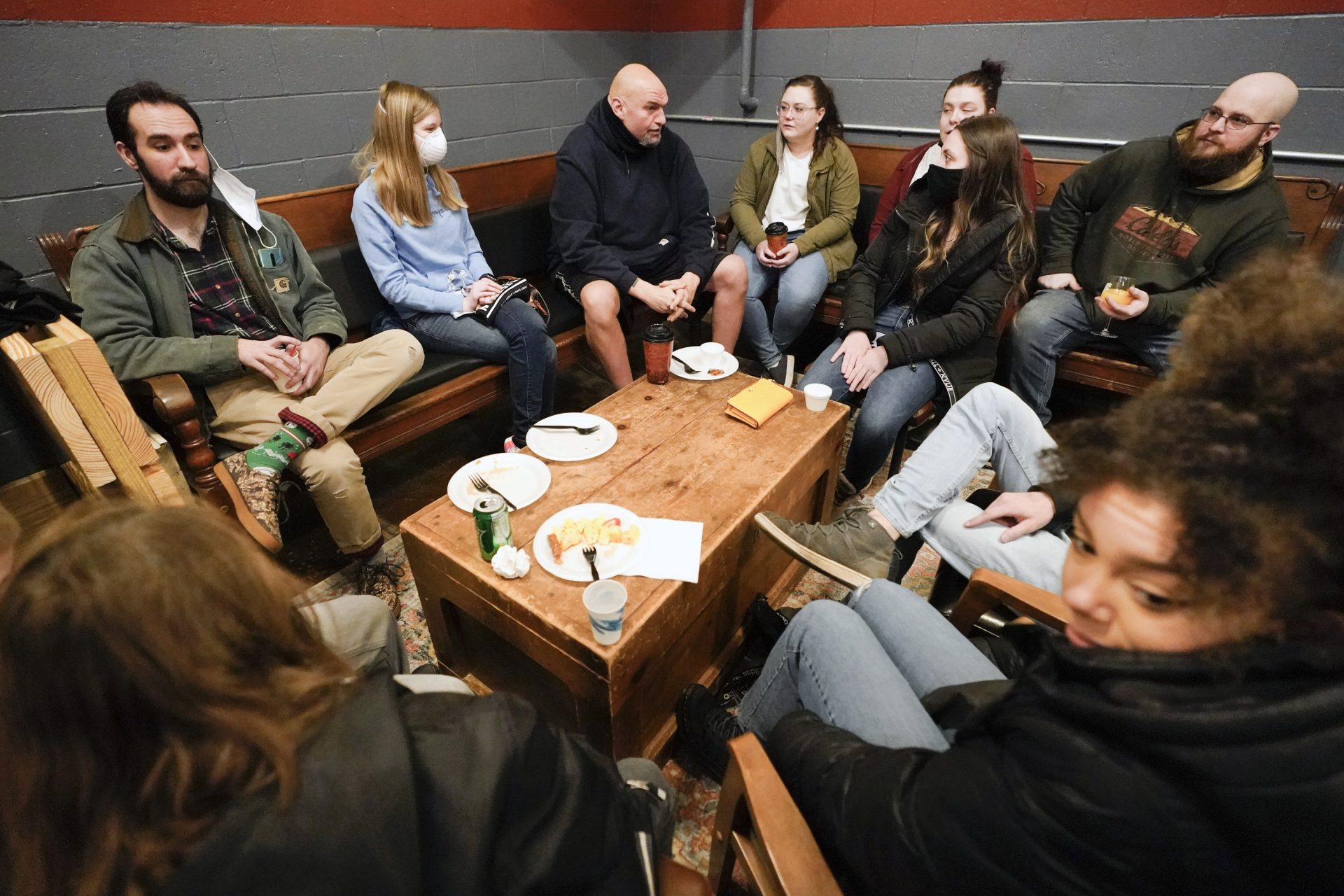 Democratic candidate for the Pennsylvania U.S.senate seat in the 2022 primary election, Lt. Gov. John Fetterman, center, talks with people during a campaign stop at the Mechanistic Brewery, in Clarion, Pa., Saturday, Feb. 12, 2022.

Even if Democrats continue to eke out victories by piling up urban and suburban votes, former Sen. Heidi Heitkamp of North Dakota fears her party will have “unstable majorities” if they cannot stop the bleeding in rural areas.

“Democrats have the House, they have the Senate, the presidency, but it’s an unstable majority. By that, I mean, the narrowest kind, making it difficult to advance ideas and build coalitions,” said Heitkamp, who now heads the One Country Project, which is focused on engaging rural voters.

She criticized her party’s go-to strategy for reaching rural voters: focusing on farmers and vowing to improve high-speed internet. At the same time, she said Democrats are hurting themselves by not speaking out more forcefully against far-left positions that alienate rural voters, such as the push to “defund the police.”

While only a handful of Democrats in Congress support stripping such money from police departments, for example, conservative media popular in rural communities — particularly Fox News — amplifies such positions.

“We’re letting Republicans use the language of the far left to define the Democratic Party, and we can’t do that,” Heitkamp said. “The trend lines in rural America are very, very bad. … Now, the brand is so toxic that people who are Democrats, the ones left, aren’t fighting for the party.”

To help win back rural voters, the Democratic National Committee has tapped Kylie Oversen, a former North Dakota state legislator, to work with rural organizers and state party rural caucuses as the chair of the national committee’s rural council. The DNC also says it’s sharing resources with people on the ground in rural areas to help improve training, recruiting and organizing.

So far, at least, those resources are not making life any easier for Democrats in northwestern Pennsylvania.

At one of Fetterman’s weekend stops in rural Clarion, a group of voters said they’ve been effectively ostracized by their community — and even family members, in some cases — for being Democrats. One woman brings her political signs inside at night so they aren’t vandalized or stolen. 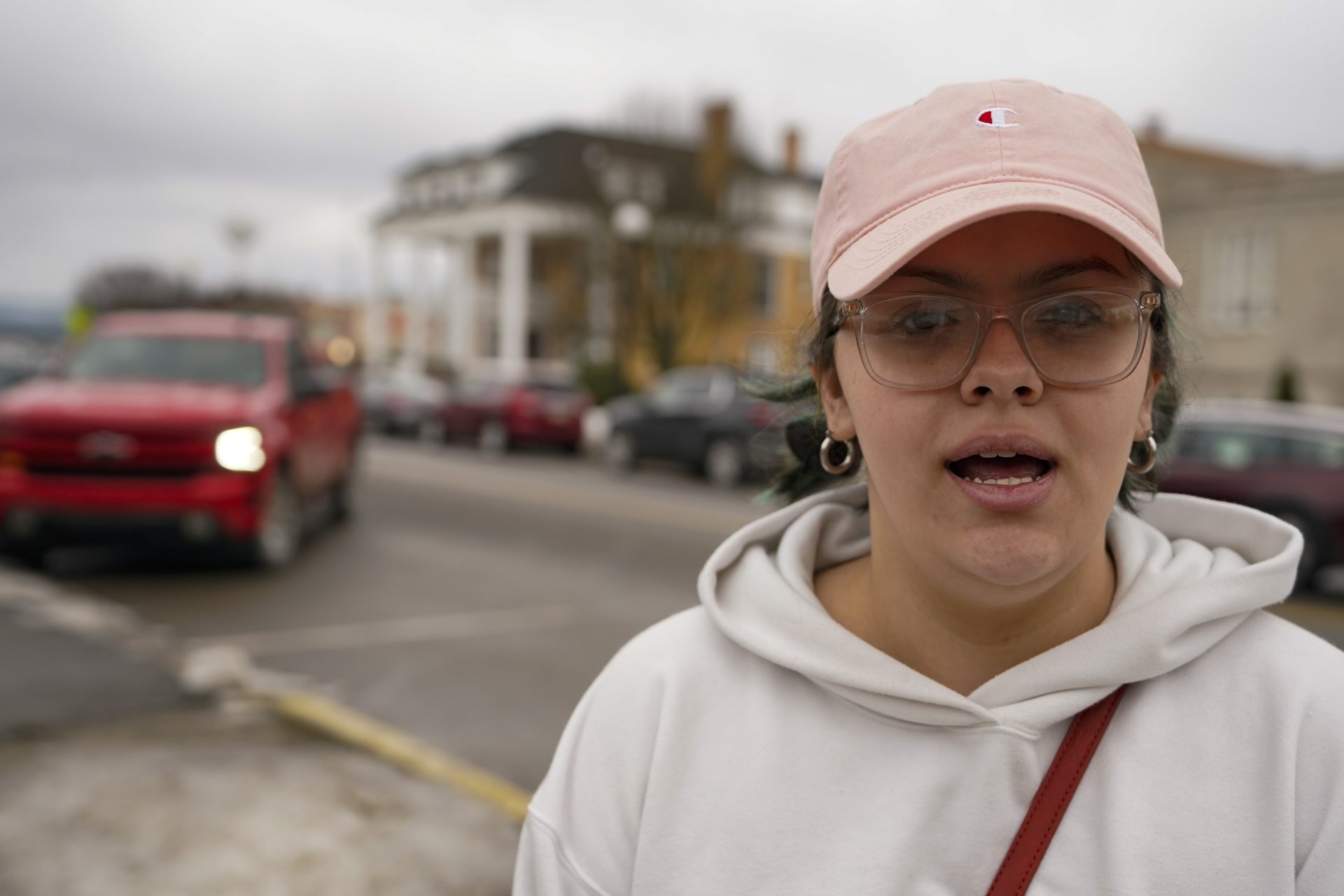 Eugenia Barboza, 22, talks about being a college student and politics while living in a small town, Saturday, Feb. 12, 2022. in Clarion, Pa. The Democratic Party’s brand is so toxic in some parts of rural America that liberals are removing bumper stickers and refusing to acknowledge their party affiliation publicly.

“You have to be careful around here,” said Barbara Speer, 68, a retired sixth grade teacher.

Nearby, Michelle’s Cafe on Clarion’s main street is one of the few gathering points for local Democrats. A sign on the door proclaims support for Black Lives Matter, LGBTQ rights and other progressive priorities.

“I would rather not say, just because it’s a small town,” she said.

One patron, 22-year-old college student Eugenia Barboza, said the cafe is one of the few places in town she feels safe as a Latina immigrant. Just down the road, she said, a caravan of Trump supporters met up to drive to the deadly protests in Washington on Jan. 6, 2021.

Barboza said she’s grateful that Democrats like Fetterman are willing to come to rural areas, but she isn’t hopeful that it’ll change much.

Well gee, they brought it on themselves, didn’t they?