Any threat especially against law enforcement or politicians will get you banned. Skip to the content

Reprint. How funny is this? America’s Largest Union Under Threat of Staff Strike Over ‘Anti-Union’ Tactics. I had to laugh when I read this.

The result of the impasse: a secret vote of members that yielded 98 percent support for authorizing a strike. Essentially, the union for employees of the nation’s largest union is ready to strike against said union for allegedly being anti-union.

NEASO President Robin McLean: "We refuse to back down from management’s anti-union tactics" that run counter to NEA's values. pic.twitter.com/s6UG7FgquV

NEA staffers are not keeping quiet about how they’re being treated, either.

“After persevering to support our nation’s educators and their #UNION through the #COVID19 pandemic, NEA’s bargaining approaches and offers are a slap in the face,” tweeted one employee.

Even as its own staff threatens a strike, NEA told the Washington Post “it is fully committed to and respects the collective bargaining process and unequivocally supports our staff’s right to use that process to advocate for themselves.”

The staff organization stated that “striking is a last resort, but it is something we are ready to do” in response to what its members characterize as “asking staff to accept stagnant pay now and well into the future at a time when inflation and the cost of living are skyrocketing” while “also trying to hike healthcare costs and slash retirement benefits that were promised to employees who dedicated their careers to the union’s mission.” 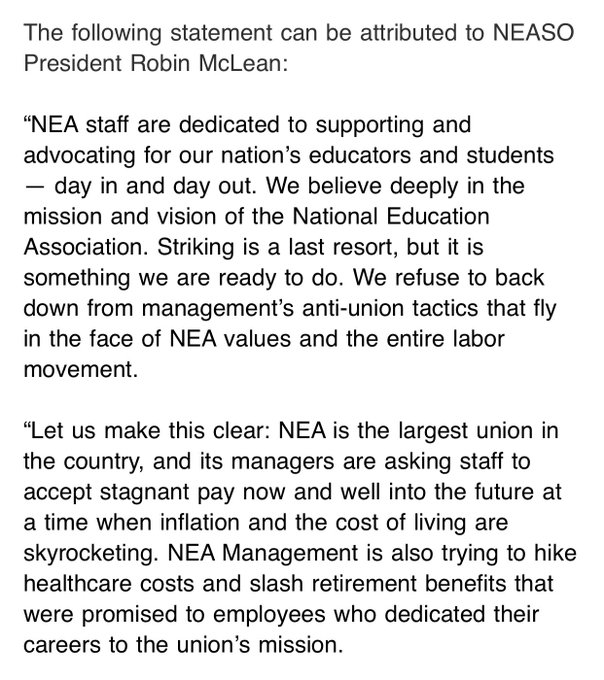 Master of Truth. A writer who has captured the imagination of many.